From Project Tamriel Wiki
Jump to navigation Jump to search

The head of the pantheon is Oriel, King of Gods. Magnus and Talos are his allies, the former representing wisdom in rule and the latter representing divine right to rule. Sheor is the deceitful king and opponent of Oriel, representing misrule and dishonor. Loan-god Akatosh is prominent in the Bjoulsae delta area, centered in worship around Wayrest. Jeffre is a minor god of entertainment, song and folk heroism. Phynastre the Mage is common in the courts among magic users while Julien is popular among scholars and mages in trade. Kynaree is a god of tactics in Warfare, marshal of Oriel. The Black Knight is her retainer, patron-god of Warriors.

Head of the pantheon is Kyne, Warrior Queen. Estranged Kings Orel and Magnor represent betrayal and cowardliness. Shorn is seen as a tragic figure, former King and Husband to Kyne, who went mad in pursuit of saving his people, having to be killed by Orel. Jon is seen as the true magician, displacing Phynastre. Malak is the main opponent of Kyne, a god of raiders and endless hordes. Jephre is seen as a tender of the garden and caretaker of Malekna Forest. Household gods are common among the Norman, with smaller heroes and spirits taking a minor role in worship.

Head of the pantheon is Magnon, the Eastern Star King. His ally Ariel represents ancestry and natural hierarchy. Magnon's trusted servants, Reymond and Meredie, help lead his kingdom as he is afar. Reymond represents divine destiny, knighthood and rightful conquest. Meredie represents questing, honorable exile and redemption. Magnon's enemies chiefly are Shal and Malaque. Shal represents pure evil and damnation. Malaque is a god of corruption and uncleanliness. Yeffre represents the harshness of untamed nature. Fynnastre is Magnon's apprentice and Jalius is his old tutor. Cynarete represents rebellion, whether good or bad depends on the context.

The Way That Winds

The Way that Winds is the name of the religious practices of the Bjoulsae river tribes, as well as a few isolated outcast Redguards along the stream. 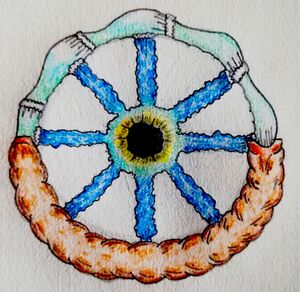 A wheel which represents the Way that Winds and how its ways connect with eachother.

All-Eater Worm - The way in which everything degrades and becomes nothing, or next to nothing. All-Eater worm devours all Mortal Spirits that pass through his mouth, and excretes them as spirits lesser than that they were. All-Eater worm stands for degradation, permanent death, and oblivion.

The Abyss - The Abyss or 'The Deep Ways' are a complex series of caves that connect the divine 'inner' to the mortal cycle, mortals, except highly gifted Bjoulsae sages, are unable to pass into it's streams. The Abyss is home to a mystical figure called Sunken-Head. It is said that mountains and glaciers are connect the Abyss to the mortal plane.

The Inner - The Inner or 'Everlasting Spring' is a place that mortals have never seen, but has found its way into the concept through the old stories told by Watermanes. It speaks of a neverending stream of water that supplies water to The Abyss and the Mortal cycle, the water also streams into The Void.

The Void - The Void is an empty space that is positioned in the middle of the Divine Cycle. The believe exists that the mortal spirits were created by revolvement of the wheel, ousting of Divine Spirits, that degraded in All-Eater worm. The Bjoulsae Tribes believe that if there ever comes a time the Cycle will start to revolve again, everything will degrade, Divine turns into Mortal again, and all that was turns into dust once more.

Mortal Spirits - Mortal Spirits are defined by their involvement in the outer wheel, or the Mortal Cycle. They are degraded into lesser spirits by All-Eater worm.

Sunken Head - Sunken Head is an ancient wise sage, that by his knowledge sunk into The Abyss, and is one of the few mortals to ever touch the Abyss. His words are carried along the streams of the mortal cycle.

Watermanes - Watermanes are the only spirits that can traverse The Abyss to the Mortal and Divine Cycles. They offer guidance to mortals, and bring messages between the planes. It is said that horses stem from noble mortal spirits that have traversed the Divine Cycle.

Giant spiritual beliefs in High Rock are a form of simple literal Animism, using both Aedra and Daedra gods as names for the common elements of life. For instance, a giant might not think Kyner controls the laws of the wind but rather IS the wind and nothing beyond that. Another interesting and unique detail of the Giant beliefs is a complete lack of an origin myth, which is extremely rare in religions. Giants seem to lack a word for time, having difficulty thinking outside of the present moment. When asked how things came to be, they respond that "things are how they are".

Druidism is one of the oldest religions in High Rock, dating back to the Merithic era. The practice aims to use wild magic, especially in the domain of Yffre, in a utilitarian manner and encourages the dogma of 'might makes right'. It was largely practiced by the early Nedic people of High Rock as well as a select few Atlmer settlers.

The origin story of Druidism claims that there were once two Mer brothers who were among the first colonists on Tamriel from Summerset, Valen and Galen. The settlers established a home in the forests of Southwest Tamriel, carrying along their way of life and customs with them. Soon they realized that their practices were not compatible with the local wild life which had turned against them vicisiously. The brothers, proteges of magic among their people, were chosen to approach the local Centaurs for guidance. Centaurs are followers of the Old Ways and knew well enough that the forest's belonged to the God of the wilds, Y'ffre. The tribe taught the brothers how to tap into the Earthbones, in order to recognize the way of things and respect its laws. Both Valen and Galen took to this practice quickly, soon becoming masters of 'Wood-Wizardry'. The brothers returned to their people and taught them the ways of the wilds. Valen and Galen would share responsibility in leading their people, aiming them away from the certain destruction their previous actions would have taken them. This union did not last forever, however, since the brothers found themselves in an unreconcilable disagreement. Valen, the elder, believed that the Mer should adapt to their new home and guard it against tampering. Galen staunchly disagreed, arguing the best way to establish a home for their people would be bending the threatening wilderness to their will. The two fought to decide their differences, using their mastery of naturecrafting against one another. After days of dueling, Valen came out victorious. Spited and enraged, Galen left his brother and their followers to far off lands. Valen and his people communed with Y'ffre and entered the Greenpact, cementing their service and symbiosis with the god and his creations. Meanwhile, far to the north, Galen traveled to High Rock and found Nedic tribes of humans, suitable students even if not Mer. Galen would found the Druids by teaching these Nedes how to harness the Wild Magic potent in their lands and use them as they see fit. As time went on, the wilderness of Y'ffre's forest grew large and untamed. Valen's followers named the forests after him and so became Valenwood. Neither brother lived to see the First Era but if this story is to be believed, their teachings live on and have shaped much of High Rock and Valenwood, in history and also physically.